We've been working so hard on creating a new website for a super cool self-publishing service: “Batenka, You’re a Transformer”.  This project is very special. And there are so many reasons for that!

We’ve talked about some things along the way. Still, those revelations could not convey the real impressions of the real people working on the project. And we believe that this is important! So, today we are going to openly speak about our experience and emotions from working on this case

– Why did we get this project?

– When Yegor Mostovshchikov first approached us, I have to admit, I’ve never read “Batenka” before. But let’s put it straight, I’m a freak, totally screwed-up in the head. And I believe that people without a sense of humour are the ones you should be afraid of. The sort that I ultimately fear and dislike. That’s why for me, “Batenka” is an outstanding opportunity to go wild in public.

Usually, when you do a project for yourself or for a client, you always face a problem - businesses are very afraid of speaking sincerely of themselves. When you go out to speak at a conference and want to say: "Guys, we're doing such awesome thing you have no idea!”. But instead, you say something in business slang about marketing, guidelines, compliance and all that. And at best, you can say use some hipster jokes.

And when you come across (as a reader, viewer or listener) something like this, you seriously miss the opportunity to talk straight. And yes, of course, there is a number of businesses that build their communication pretending to be genuine – and that’s not bad, actually. But let's face it: when you do business, you can't allow yourself a lot of things. Only the fools, misfits and the “proletariat” have nothing to lose, so they can be real honest people. While all the rest of the normal “bourgeois” have loads they want to hold on to. So you can’t just talk straight about everything you have on your mind. You can’t do a project the way it should be. You can’t go crazy with your creativity. You have to limit yourself. You always have to find a compromise, remember that “someone might get it wrong”. And you're not allowed to say “crap”.

So, what am I on about? "Batenka" is an awesome client, ‘cause you can do it all! This is exactly the project, where not only can you do it, but you are supposed to do it! That is why we were able to put our best professional skills into it. We have a great dialogue with the client’s gang (there’s no way to call them just a company) - as we are essentially in the same boat. The dudes have an awesome creative manifesto. They are crazy and mad. And that’s a proper creative attitude and pure art, as I see it. 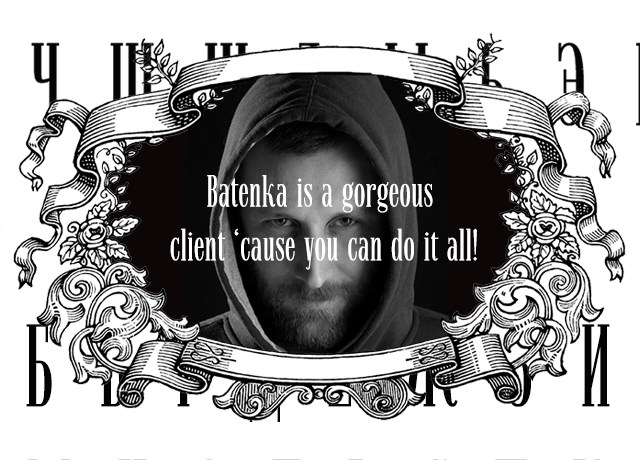 Besides the commercial design project, we’ve also come up with a unique font! That’s the thing we’ve always wanted to do. A custom font tailored to a client’s project. And that’s 5 damn man-months of work! Who on earth gonna pay so much just to have their own personal font?! And, to be honest, Yegor didn’t have that much money either. So, we just did it for free. Because it was fun. And because sometimes you have to do something like this. And I firmly believe that both the font and the design are totally kick-ass.

– Was there anything else?

– Sure. But I won’t go into detail on all the madness that was going on during the work. Read "Batenka" and you’ll get the idea. I also want to add that I really like how attentive the guys are to the visual part. I must say, Mostovshchikov is a terrible bloodsucker. Because he got his claws into everything so he got way more service than we initially wanted to provide. By the way, if you have an outsourcer, then do as Mostovshchikov did. So, firstly, when he likes something, he tells you straight that you are a freaking awesome dude. And then, when he asks for something else, it’s very difficult to say no to him. But, in general, we sometimes do it anyway, because he just wouldn’t stop asking for more otherwise :)

— How much time have you spent on this project?

— You better don’t ask, because I’ll start crying only thinking of it.

— Can you now call yourself “Batenka”s regular reader?

— Well, I look at it. Because it’s a pure eye candy. I look at how the font and the long reads look like. I’m really pleased with the result. We think it’s cool. We’ll be finding ways to continue working together, we’ve got some ideas already. Tin general, I know, of course, what else could be improved. But let’s bring this thing to life first! 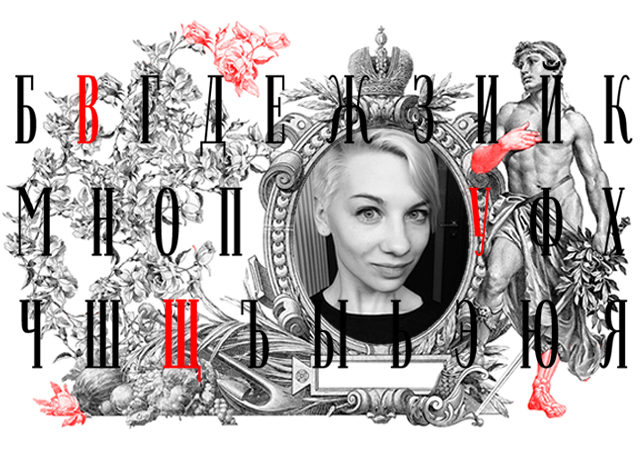 — Was there anything special and memorable about this project?

— You know, it’s always cool to work where people love their job. I get so excited about new interesting projects; you throw yourself into work and can't sleep at night until you come up with a brilliant idea. What I mean is, crazy projects like “Batenka” are gifts from heaven. It was sent to me on my birthday when Yegor came to our office. That seemed to be the best gift that day! Harry Potter as a client, magical content and the Order of Post-Apocalypse – what more could you wish for?

— So, how did you feel throughout all that time?

— Well… at first, I thought my pink fringe was way too encouraging for the team :)) I thought I’d have to eat some mushrooms to generate all that madness, but I managed to tune into the beat and was completely immersed in the project, and it started to grow and fall into place. The main challenge for me was to make the interface speak with the voice of an aristocrat on such... hmm… hot topics as powerlifting… you know it was that article that I blushed over for the first time while reading. But then the routine work started. The grid and layout rules, strictly calculated proportions, the spirit of last century’s newspapers and a book by Monty Python were my best companions throughout the work process.

And as for something special… The font is surely special. None of the currently existing fonts sounded right, none of them had the “voice” of our aristocratic narrator. So we just went and made our own bespoke font, the Theodore Glagolev Display. My colleague, Grigory Koposov, has developed it. At first, it was just for fun, and then we got completely stuck into it. Not surprising, as it was like a small world of its own! So, for me, that’s how “Batenka" got his voice. And that’s how I hear it now. And see it. I’ve talked about working on this project at Behance Portfolio Review No. 9: 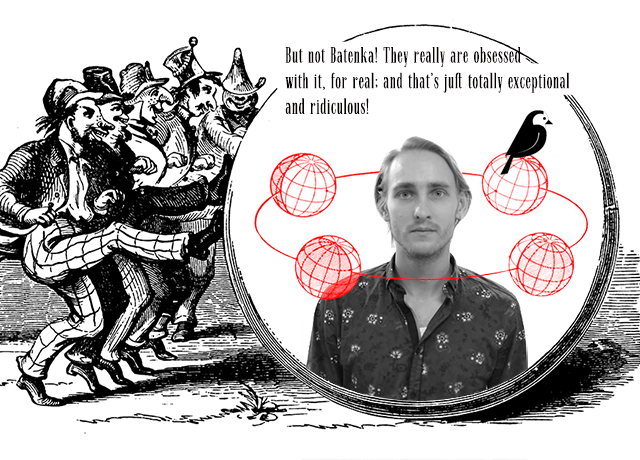 — What was the most memorable thing about this project?

— There’s one thing that’s super important: the guys promised at the very beginning to be totally committed to content. Yeah, every developer hears this from the client, but no one really does it. But “Batenka” is not like that! They really are obsessed with it, for real; and it's just a phenomenon and a nonsense! If we are to speak about the project itself then… Let’s take ETV, the Yekaterinburg TV company as an example. They came to us at JetStyle and said they want to make cool long reads, so they would need a system that would help them make those long reads. We spent a ton of time and resources on that project working on the concept and designing the set of content blocks and the CMS. So that the client could create some “wow” content. And then there was “Batenka". They approached us with a similar brief. We Googled and Googled again, we searched everywhere and we finally found a solution that made “Batenka" what it is now. CMS Wagtail. It provides the editor with a block-based interface for creating content; the blocks are customisable so they can be presented in an arbitrary manner both in the admin area and on the front-end. This means you can insert various grids, galleries and snippets. To be honest, that’s just a hell of a system! I’ve really never seen anything like that. Apart from being easy to use by the editor, it gives outstanding content layout design capabilities and it's developer-friendly.

So, we built the website based on that system. And the content looks ace! “Batenka” does a great job at putting together essentially diverse content on one page, and that’s a major achievement!

On top of that, we have gained experience in developing such projects. I must say this solution can compete with those by Look at me Media. That’s because ours is not inferior in any of the functions. Basically, if we hadn't found Wagtail, there would be no “Batenka" with its surreal requirements for content and high aspirations for its display on the web. But it’s there! And it’s so cool. 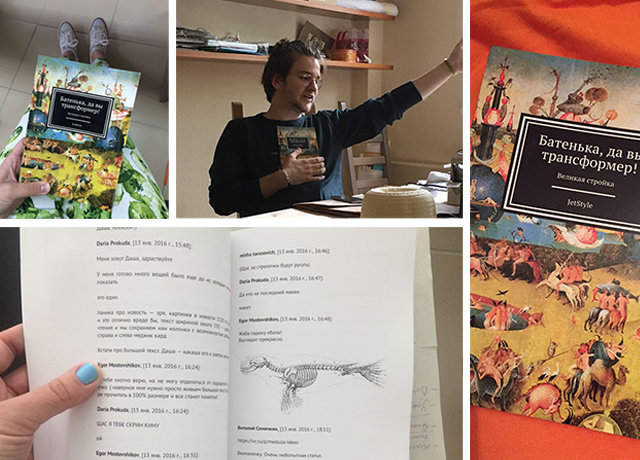 We also published a book from our working correspondence in Telegram with the help of Ridero.ru. And the guys brought us the bust of Theodore.

That's how we live at JetStyle :)