Our tour this year is finally coming to an end. It's time to remember one of the most exciting, long-awaited and important business trips – at the Web Summit 2019 in Lisbon. Three days, over 70 thousand people, and the best place to be for networking and gaining new experience. How it all went and what conclusions we made after attending this conference – read in our new blog post.

At the end of last year, we at JetStyle set ourselves the task of attending more major international conferences to meet foreign colleagues, establish new contacts, and look for potential clients and partners abroad. But, since we couldn't attend all the events, we went through a million European conferences and chose just two. The first one was the World Usability Congress in Graz (we already talked about it). The second one is the Web Summit in Lisbon. The largest and, judging by the reviews, the best conference in the world for networking. 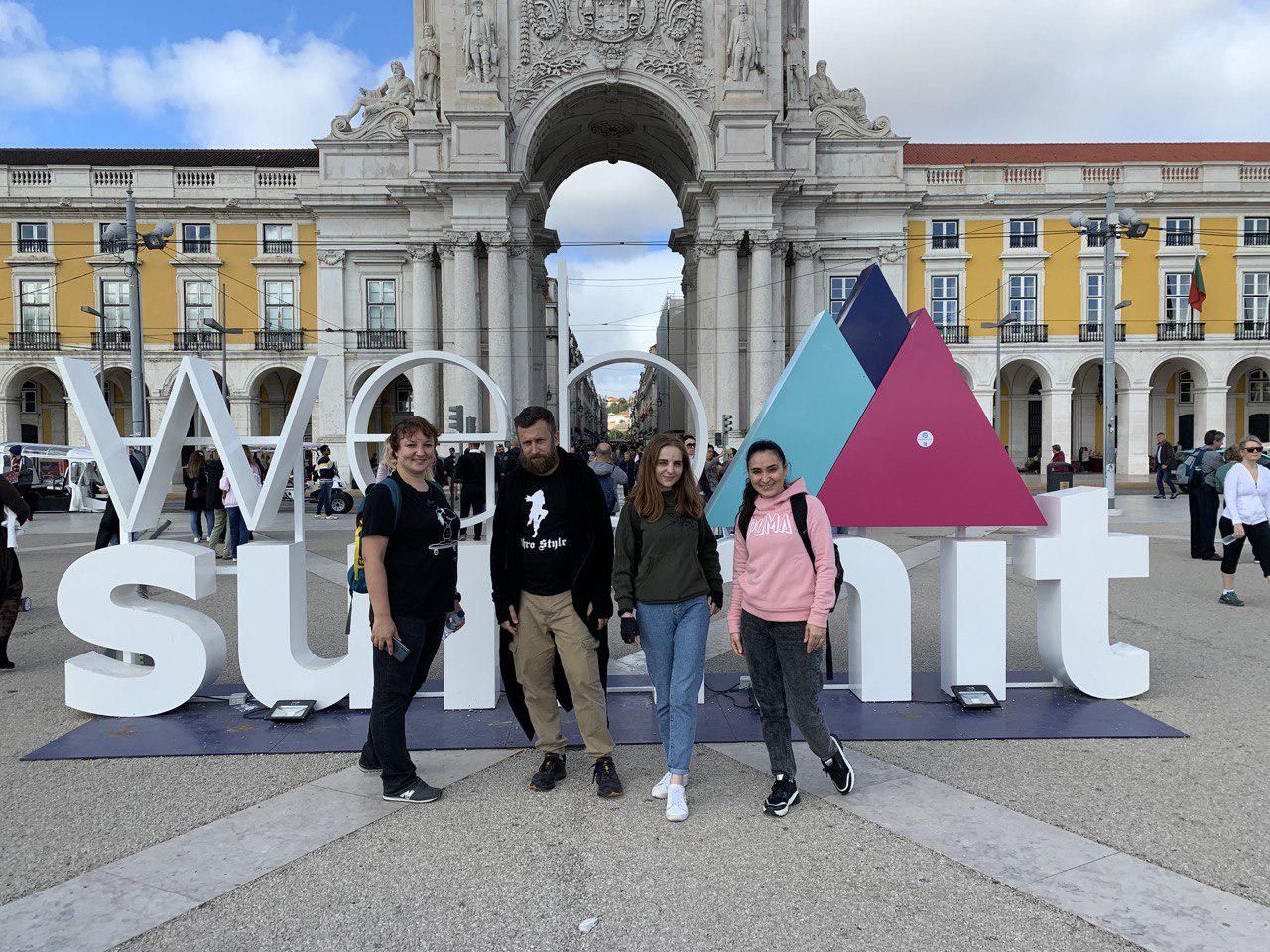 The JetStyle delegation included our CEO Alexey Kulakov, development director Snezhana Maltseva and project manager Ekaterina Sokolskaya. And our partner project Ridero was represented by their product director Alexey Kulakov (yes, this time he represented both Ridero and JetStyle) and marketing director Polina Bynova. Snezhana and Ekaterina got registered as regular participants, and Alexey and Polina – as Ridero startup.

The event organisation is top-notch

Easy navigation throughout the city: in the subway, on the main square, on the main streets. The Summit logos were installed in the most crowded tourist places, and everyone was taking photos next to them. It felt like this event was really important for the city and the country. There were reception desks for the Summit at the airport and the entrance to the city. On arrival at Lisbon airport, you can register for the event straight away, no need to waste your time standing in the line at the Summit entrance. There were many Russian-speaking volunteers. 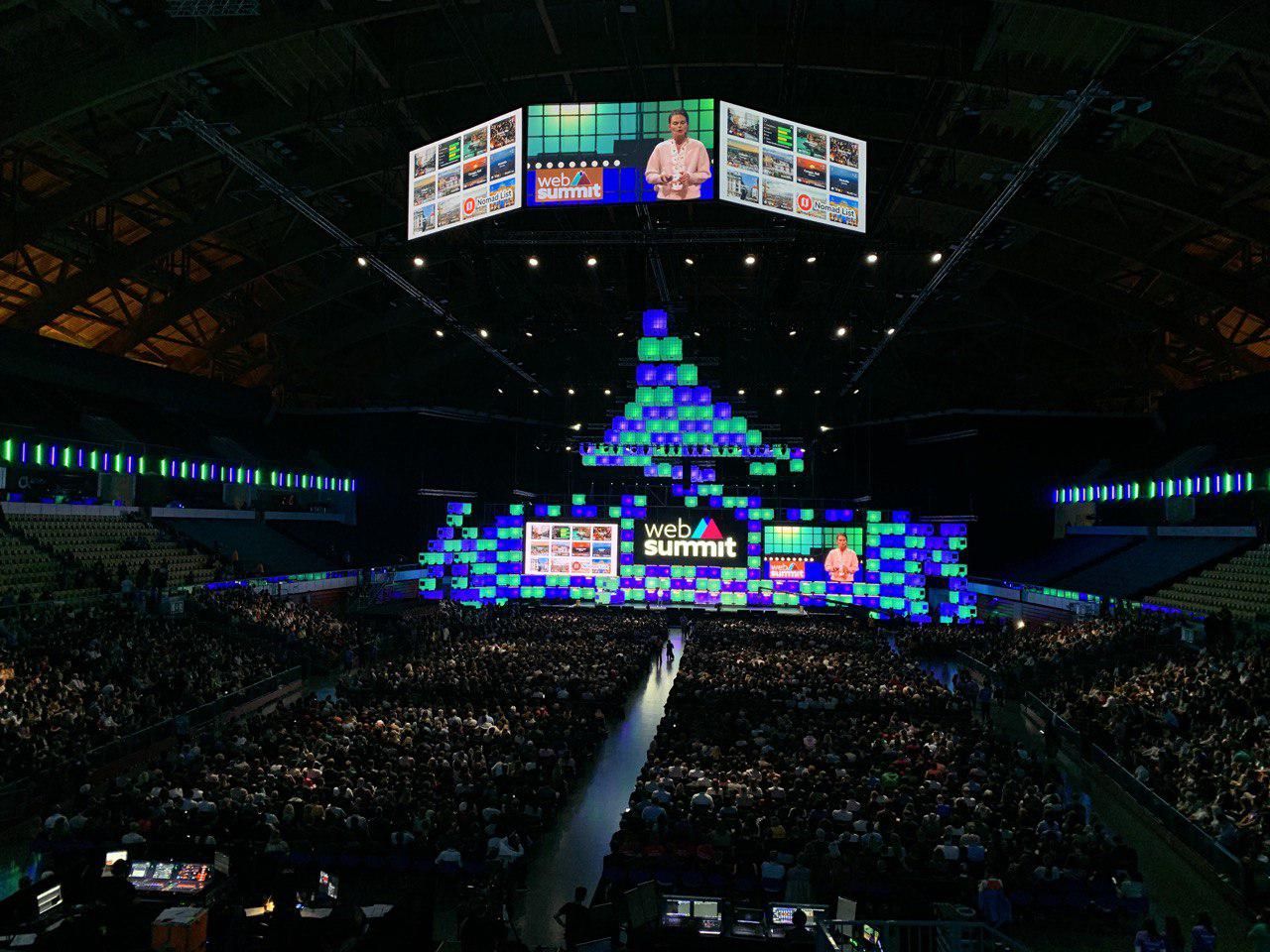 The atmosphere of a show

From the very beginning, it all looked like a big sports event: a long queue at the entrance, security check, darkness, stage, a huge hall, music, spotlights – a real show. Every year, the organisers invite famous speakers, celebrities, top managers of large corporations. This year, the most striking moments, perhaps, were Ronaldinho coming on the stage, and Edward Snowden speaking on Skype from Russia.

Everyone came for networking

There are a lot of opportunities for networking there. And we, like most companies, startups, and developers, went there mainly for communication, and not to listen to speakers. Given that there were a million threads and discussions on various topics, the participants listened only to the most interesting ones, and the rest of the time, almost all of these 70 thousand people went around and talked to each other. The speeches were in the background, all the main movement took place in the halls around the companies' and startups' stands.

How we got ready for the conference

Made portraits of the target audience

We created the portraits of our target audiences – the people we wanted to meet at the Summit:

1) digital agencies for which we can be subcontractors;

2) startups for which we can be a hired team;

3) developers for whom we can be partners. 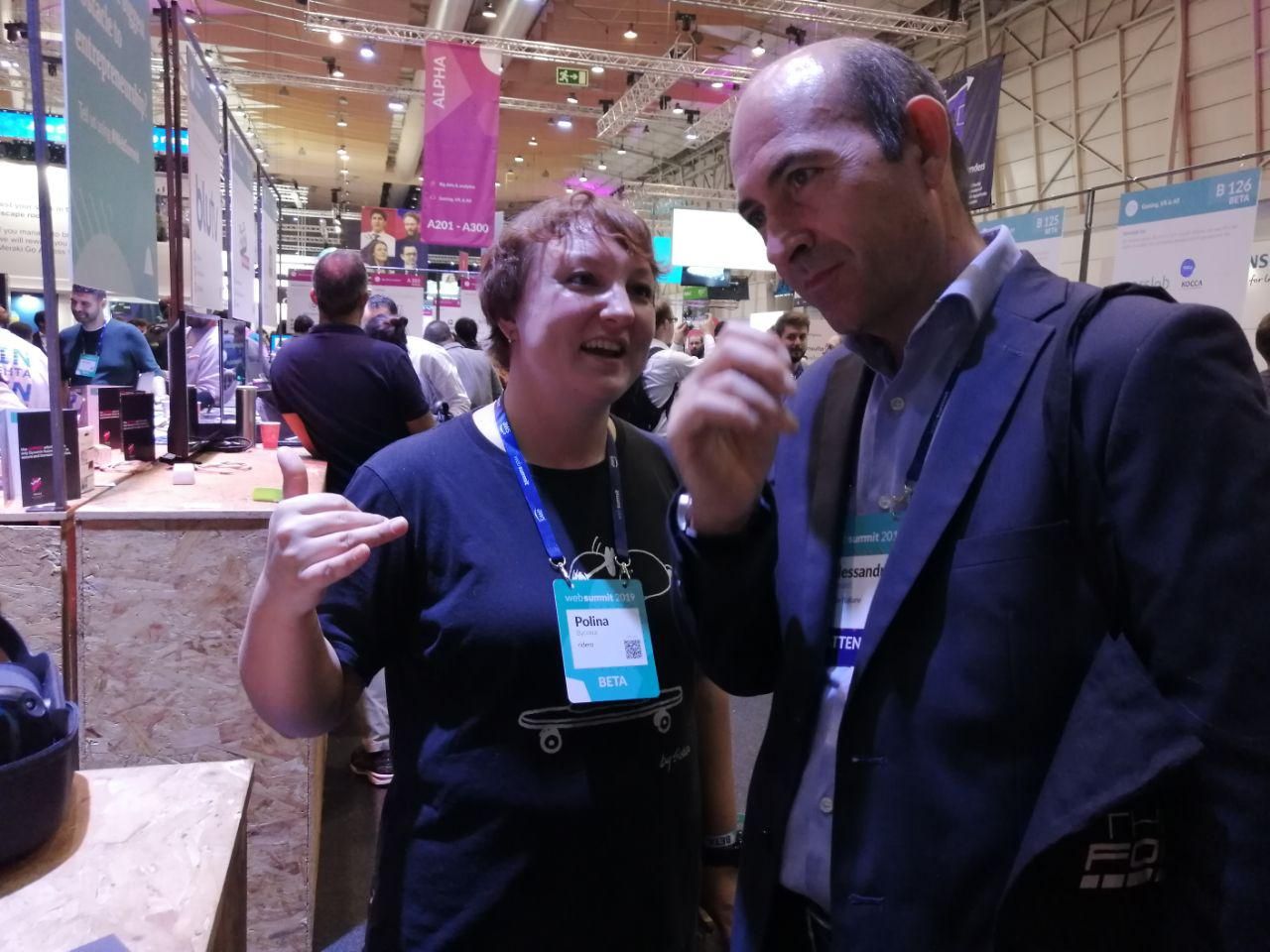 The application has a list of all participants of the Summit. We simply selected the people we were interested in and wrote to them: "Hello, we are JetStyle digital agency, we do this and that, we'd like to meet with you." There are usually few responses to such requests, but we met with everyone who answered. The app was also useful during the Summit: each participant wears a badge with a QR code – you can scan it and see the person's name, the company they work for and what they do.

We updated our company's presentation in English and prepared pitches for each target audience – a short intro: who we are, what we can offer, how we could be useful to them, what case studies we have, etc.

Translated our merchandise into English

For the Web Summit, we printed our cards with feedback techniques in English and presented them to our potential partners and clients when we met. And to our joy, such an unusual merch was rated very highly. Representatives of one company from Russia said that this was the best merchandise they have received in several years. This means that now we will take them with us to all upcoming events! 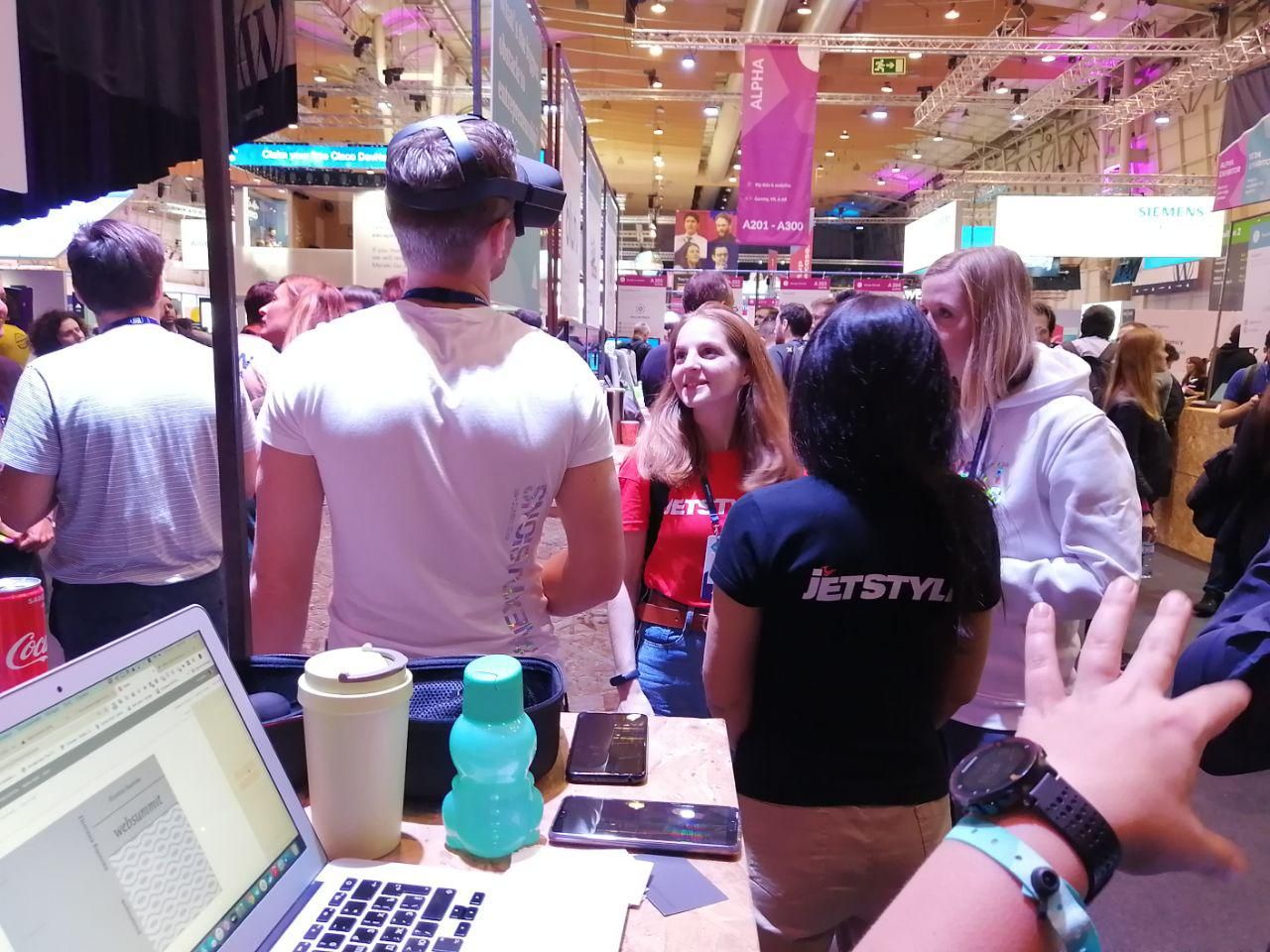 How we attracted people's attention

The White Tower, of course

Everywhere we went, we carried a VR headset with us and showed our WebVR site for the White Tower, and each time it made a wow effect. People came to us themselves: they saw the reaction of a person with the VR headset on, approached us, put it on, and got impressed. This way, we met with developers who are also interested in the topic of virtual reality, and with potential clients who came to the Summit in search of contractors.

The magic of augmented reality

We also brought to the Summit the AR beer coasters we made for Grott Bar. Initially, we had a great idea to show the AR magic in the evenings at the Night Summit as it seemed to be the right time for the beer coasters, but something went wrong. (We will tell this further). Therefore, we showed this beauty during the main program of the Summit and it got lots of attention during the day.

And Ridero had their own stand

Alexey and Polina stood there the whole day, from early morning until closing. In general, WebSummit is ideal for startups. At the time of registration, startups are divided into three groups: Alfa (at the stage of testing hypotheses), Beta (in search for investors), and Growth (already with investors). Ridero is in the Growth stage, but they have registered themselves as Beta to attract investors for the development of the service in Europe. There was a lot of interest in the service – people wanted to know if our neural network could write a book itself)

What we weren't prepared for

The format of the Night Summit

The Night Summit is an evening party dedicated to meeting new people and having fun, with a DJ, bars, and walking along the streets. According to the stories of our friends who travel around the world to the best conferences, the Night Summit is the event where they make the most of useful contacts every year. We went there with great expectations. But the networking area was loud like a nightclub. The DJ from Brazil was great, but it was unreal to communicate. We then decided to have dinner, and while queuing outside of a restaurant, we met an agency from Ukraine (consisting of 12 people). But when it was our turn to dine, the restaurant staff seated us at different tables, because they simply didn't have such a large one.

As a result, we got the feeling that on the first night of the Night Summit, everyone was sitting with the people they arrived with. Therefore, we focused on the daytime part – we set up all meetings in the morning, went around absolutely all companies' stands, and tried to get to know as many people as possible.

The organisation of the event was excellent except that, as it turned out, the main hall didn't have enough seats for everyone. At the event of 70 thousand people, the arena was designed for 25-30 thousand. On the first day, we got to the opening only after an hour and a half of waiting in the queue, but later we met a lot of people who didn't manage to get in. To avoid crowding, on the second and third day we arrived in advance but still had to wait at the entrance for forty minutes. 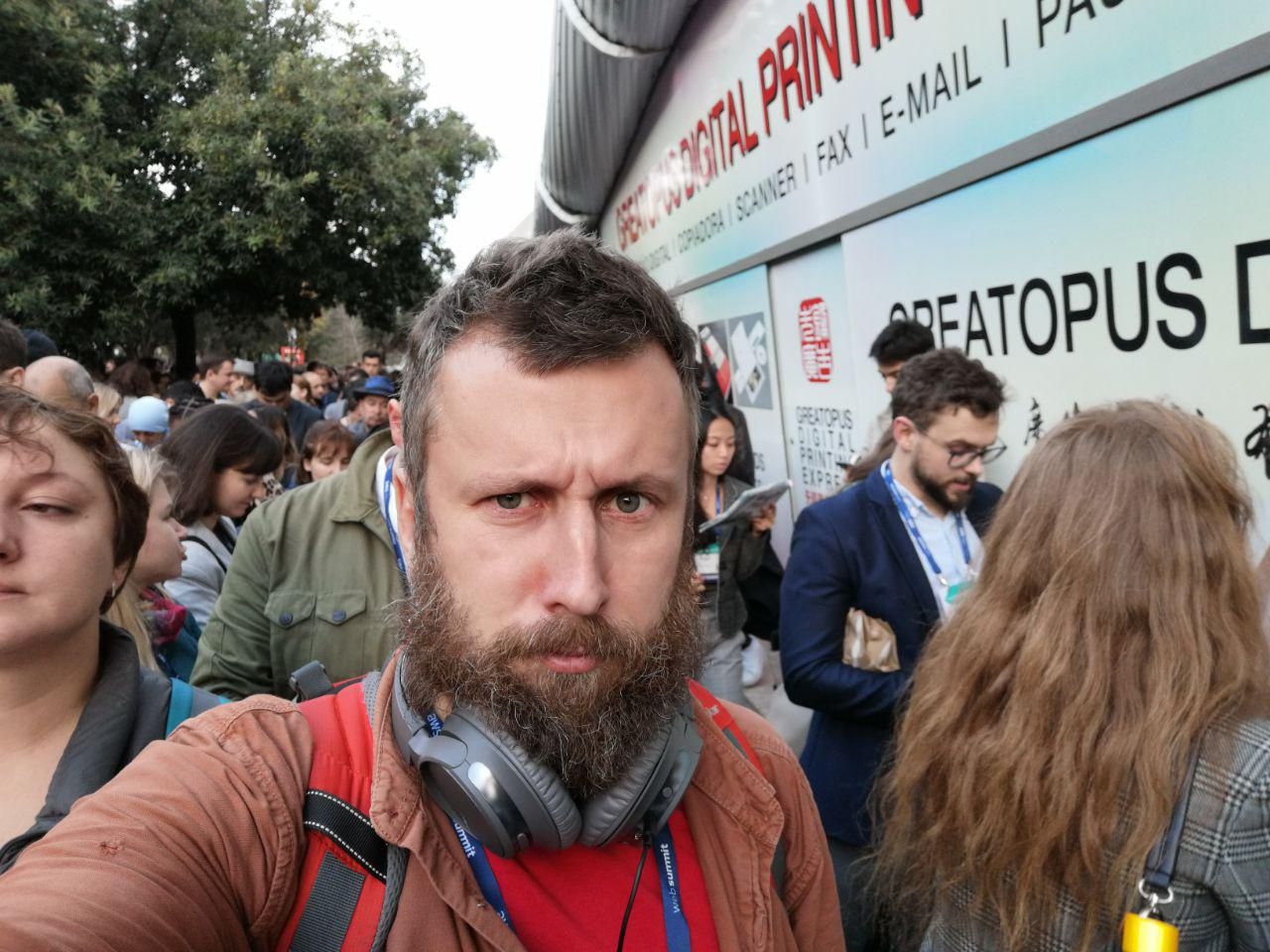 Profit from the trip

We got hundreds of new contacts and talked with interesting people, handed out our merchandise, showed our best projects, and attracted attention. We have made many new business acquaintances, we now stay in touch with them and hope that they will become our clients in the future.

For the first time, this is more than enough. And, most importantly, we now know how to prepare ourselves for such conferences: what to bring, who to look for, what to talk about, etc. We also listened to speeches at thematic sessions and realised that next time we can also sign up to participate in discussion panels on design and UX topics – we have something to tell Web Summit members. 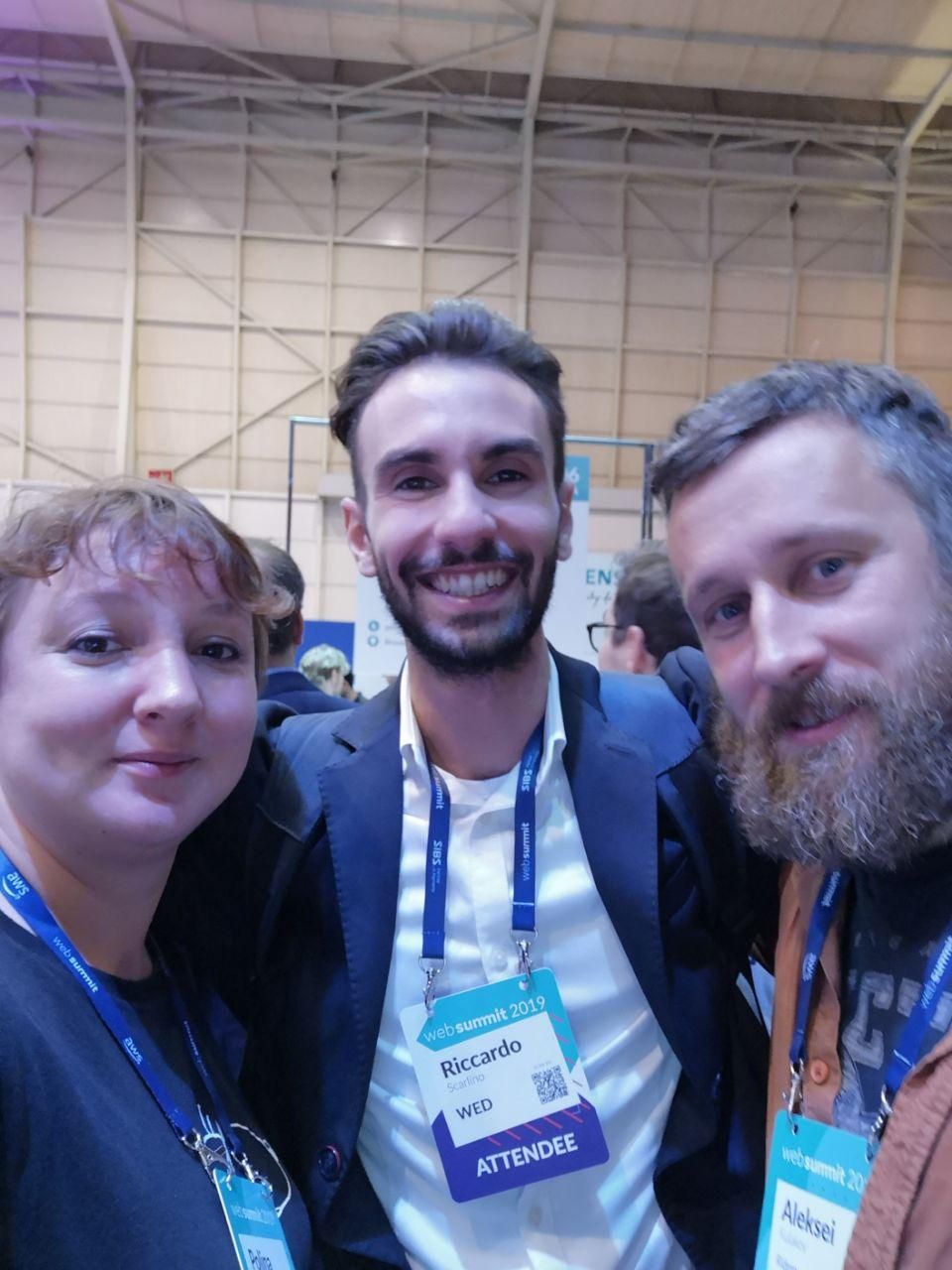 1. If you are going to the Web Summit as a team, share the responsibilities: one part of the team attends the daytime events, the other – the Night Summit. It is very difficult to do both at once, even if you can work all day on no sleep.

2. You need to somehow stand out from the crowd so that you get noticed. It’s best to wear something like a bright hat or scarf. We saw guys in unicorn hats and a team in German (or Austrian) traditional outfits. This way, it is very easy to attract attention.

3. Apart from using the Web Summit app, you also need to search for everyone you want to meet with on LinkedIn or Facebook and message them there too, because in the app people often don't answer or don't read messages at all. (Except those who come to the Web Summit for networking).

4. It is very useful to communicate with development teams like yourself and share experiences. At domestic conferences, this is sometimes impossible, because you are often considered as a competitor. At the Web Summit, we didn't have this barrier – everyone was very friendly.

5. Even if something didn't work out the first time, you still need to go to such events. One way or another, you introduce yourself to potential partners and clients, get noticed and remembered by them, make new contacts. As we were told by experienced people, this all usually takes a year or so to start bringing benefits. 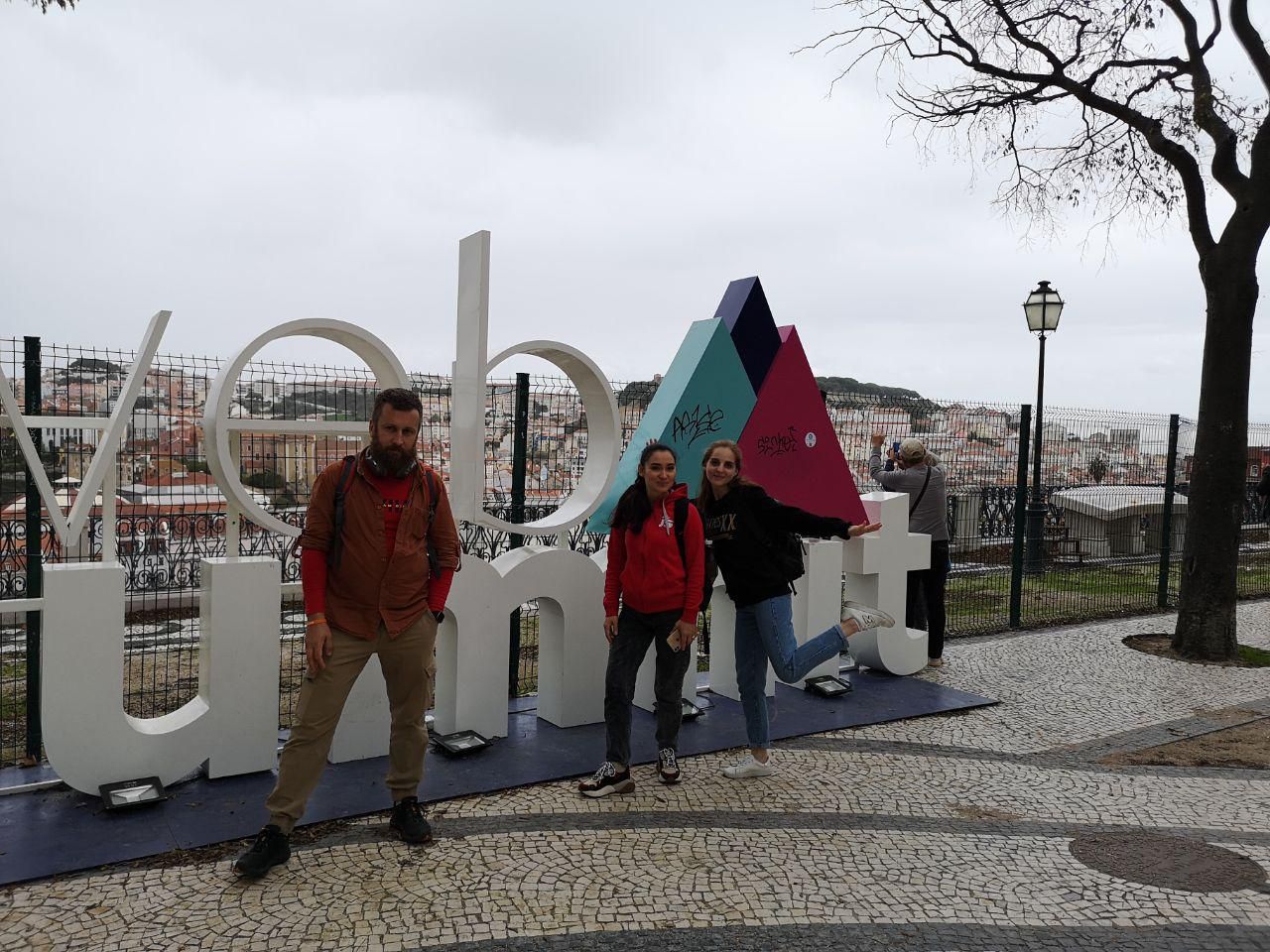