JetStyle: How to teach employees to be independent. Part 2

We continue to talk about feedback and delegation, and here is the second part of our joint article with IIDF on how to teach employees to be independent.

In the first part of this article, Alexey Kulakov, CEO at JetStyle, and an expert on the Art of Business Management course at IIDF told readers how to teach employees to be independent, what tasks to give at a particular stage of development, and what the manager should do so that the team can solve high-complexity tasks.

In the second part of the article, we will talk about goal synchronisation, feedback, and layoffs. 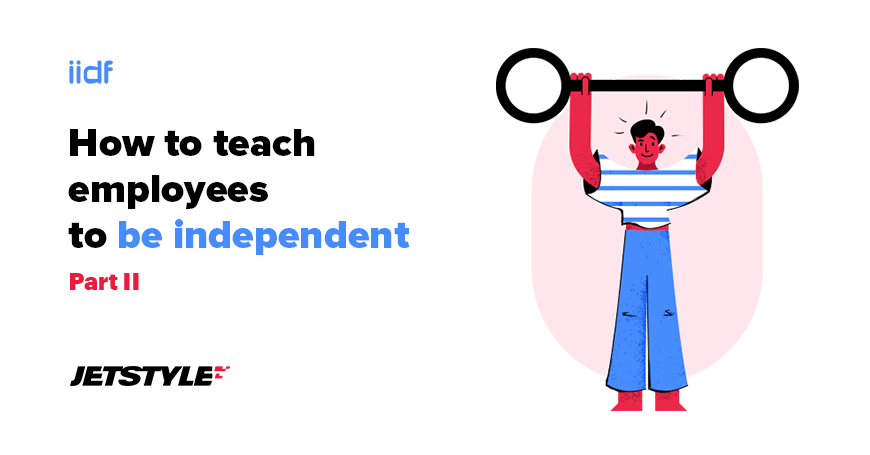 At any level, you need to synchronise goals

The goals of the company, customers, and specialists need to be synchronised. Let’s take an example:

A certain studio makes corporate websites on WordPress. Their goal is to form long-term relationships with clients. The goal of the clients is — the site is good, inexpensive and solves marketing problems. At the same time, the developer wants to solve interesting problems, learn from the best, try new technologies, and, for example, make a website not on WordPress, but in some modern framework with trendy programming methods, so that there is something to talk about at a technology conference.

There is a conflict of goals here at least between the developer and the client. If you take another framework instead of WordPress, set up docker containers, and write everything as a set of microservices, then the client will receive a site that will cost more but may work worse than on WordPress. For example, it may turn out that the site on WordPress did an excellent job with the task and had a lot of convenient little things written before — which were not added to the site in a new framework because there was no time for that.

The client’s goal: A beautiful site, which is inexpensive and fast (this is an example of a wrong goal that will further lead to desynchronisation). 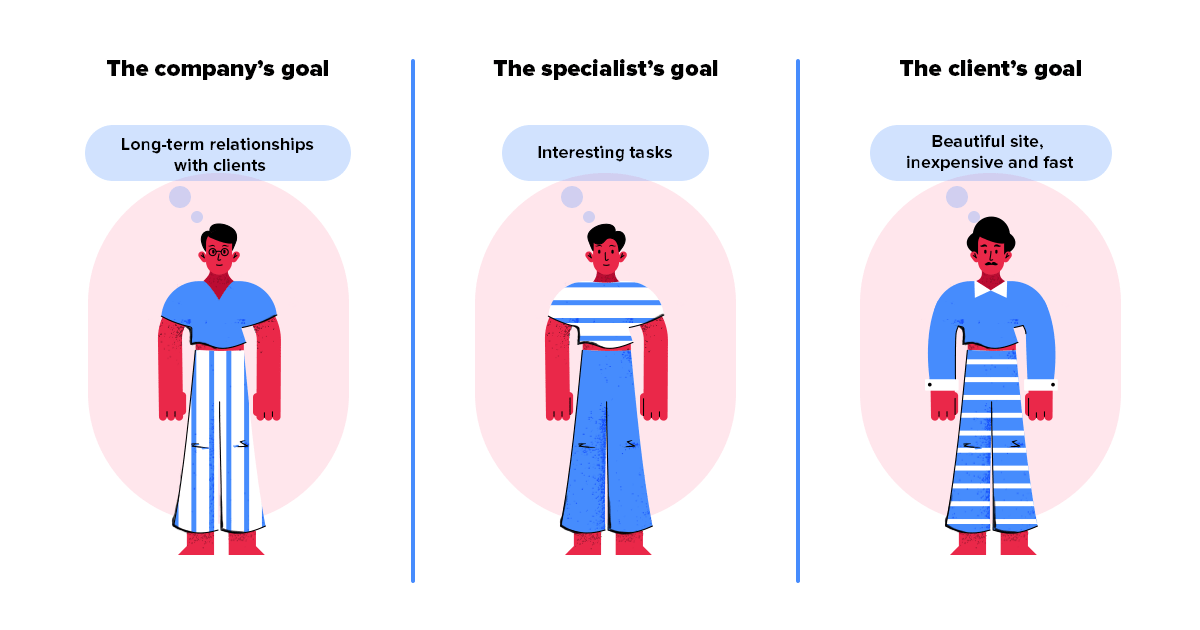 If the goals are different, there will be problems. Let’s say a company assigns a task to a manager who receives a profit bonus. The manager will choose such a solution so that the client is satisfied, but then there will be personnel risk. The developer will think: “What am I doing here? Am I growing? What is going on? Bye”.

If you assign a task to a developer, they will be guided by their goal — to solve interesting problems. They will do it, put it on GitHub, and speak at a conference, but the company will lose a client and will not make a profit.

“What am I doing here; where is the development? What is going on? Bye.”

In Cloud Cuckoo Land, the company would have done everything right from the start; for example, they would:

But if the company is in a less fantastic reality, the leader must choose whose interests will have to be sacrificed and do it consciously. Suppose a developer wants to make exciting sites, but you need to make a site on WordPress — this is a conflict of goals. The manager does not offer a choice to the developer, but makes a choice themselves, and chooses one of the two:

In the second option, the manager will need to set the task for a developer at a lower level of abstraction.

The task at a higher level of abstraction: Alex, go, deal with the client, do everything in the best possible way.

The task at a lower level: Alex, we are making a website on WordPress, plug in these two modules and put it on a template here. 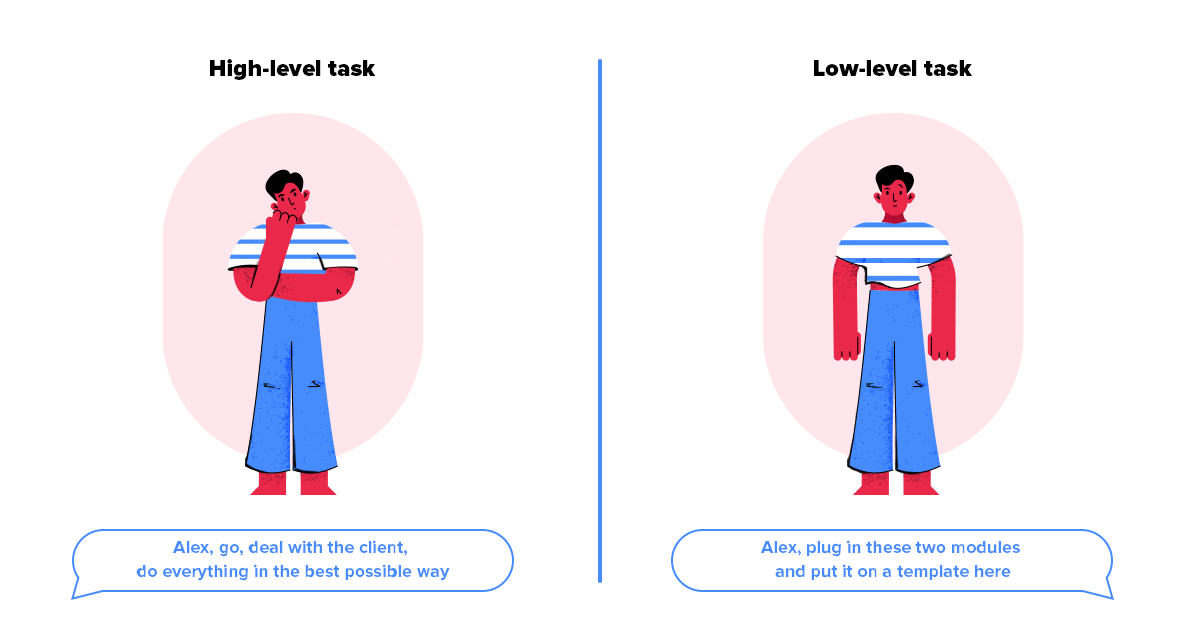 So the manager performs the mental part of the task themselves and delegates a much smaller piece of responsibility to the developer. He or she treats them like a less independent specialist and thereby reduces the likelihood of short-term risks, such as a damaged relationship with a client, but makes the developer’s life less exciting and independent.

To grow independent people, you need to create vast areas in which the goals will coincide. Trust appears when the goals are aligned, and tasks with a higher level of responsibility can be delegated.

Let’s get back to the topic of feedback. In our system, there is a criterion for good feedback, and it is simple: the person who is given the feedback believes that it has moved him or her towards achieving their goal.

Each system, including a human being, is formed according to what determines development, namely, the feedback. Where do we get it? Do we know how to digest it? What part of the feedback do we react to? If a company becomes the source of the most valuable feedback for its specialists, this allows them to be shaped according to the tasks of the system.

If a specialist receives the most valuable feedback outside of the company, but, for example, at industry conferences, on a forum or in the chatter of other specialists, the company can be congratulated: it released him or her to the free personnel market.

This does not mean that people should be kept in a bunker and not allowed into the outside world; no, this is impossible. The challenge is to provide the highest quality and most valuable feedback.

Let’s say a manager and a developer, Alex, have a startup, and they have a common goal — to create a neural network that will recommend products. The manager sets the task. Alex does something and receives feedback.

Alex, we have an online store that sells diapers. Please plug in the neural network so that it recommends products and increases the average check.

Alex, you performed your task like a dummy! What the heck is this? I told you that the main thing is to show expensive goods on the top (which he or she didn’t say, and that’s generally a stupid idea). And you haven’t done it! Why did you waste so much time at all? 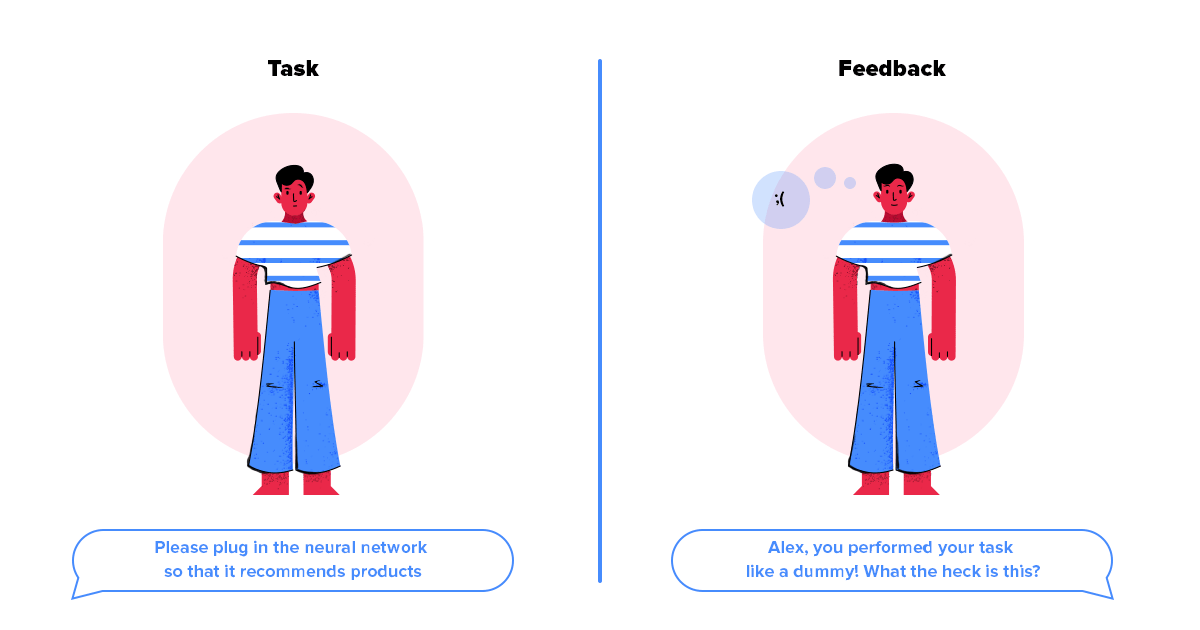 This is an example of bad feedback. To make it even worse, the leader does not just say this to Alex but arranges a public dissection in the presence of colleagues. Even if we imagine that the developer is a thick-skinned person and thinks: “Lord, they’re a moron, they always say something like that. Okay, sticks and stones may break my bones, but words will never hurt me” — and will not quit, the problem with the feedback does not disappear. The feedback from the example will not help Alex achieve his goal in any way. This kind of feedback does not clarify what needs to be done in general.

If the leader wants good feedback, they must give it in a way that helps the person achieve the goal. To do this, the leader needs to take care of the responsibility transfer in advance. Both the leader and the specialist must understand what they are doing and what for, and formulate a hypothesis together, like equal adult people.

For example, the manager and Alex formulated a hypothesis and launched a neural network, but the average check did not increase, and sales also fell.

Alex, please suggest a solution that will increase our LTV. Let’s agree on how we will check it. Let’s say we do an A/B test. We have enough traffic to apply it. Nevertheless, there is a possibility we won’t get there the first time.

Alex, we have a problem. I mean, you and me (the leader does not shift responsibility, but shows that the decision was made together and the responsibility is shared).

We dropped sales. Now let’s, first, roll back as quickly as possible. And secondly, we will analyse and understand what we did wrong and how we got here. Where did we go wrong? And what is useful in this situation? 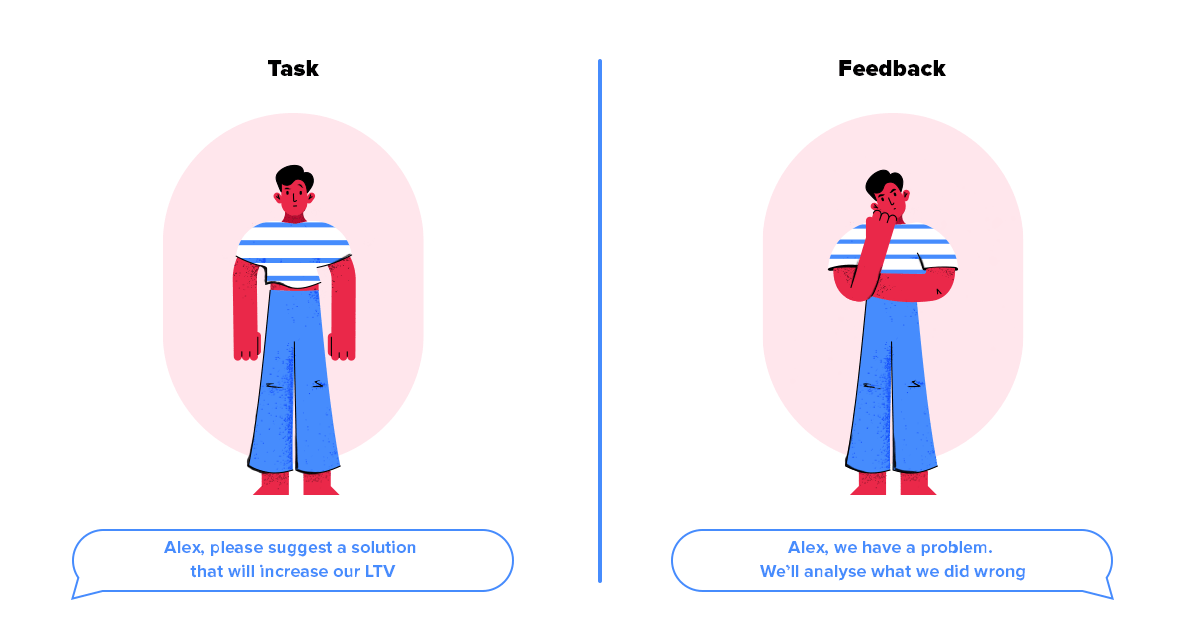 In this case, Alex will have to work much more than when the head just yelled at him. Because he found himself in a situation where he was responsible for what happened, he took this responsibility upon himself.

But the leader shows that he or she respects his position and does not refuse responsibility for their part of the task. Alex is left to agree and go to solve the problem. He can say: “I understood everything — let’s solve this problem differently, and not with a neural network,” and find some area of ​​interest in this.

Supposedly, Alex says: “I don’t know what to do.” This is a rejection and a request to give more manageable tasks. If this happens for the first time, that’s okay. The leader measures his level of responsibility: “Okay, I understand. I gave you a task for the hundredth level, and you are still at the tenth level. It’s no big deal; now we will calibrate.”

Okay, I understand. I gave you a task for the hundredth level, and you are still at the tenth level. It’s no big deal; now we will calibrate.

But if a specialist shows negative dynamics: does not take on challenging tasks, refuses responsibility, and copes with less and less demanding tasks with a low degree of responsibility, although earlier he or she could solve anything, it means that something is going wrong in relations with this person. Perhaps it’s not a matter of personal qualities, but a breakdown of the “company-person” system. In any case, if you do nothing, the situation will get worse and worse until the company and the person part.

For the situation to require dismissal, several factors must coincide:

In this case, the manager should say:

“Alex, you work here to achieve your goals, and we work to reach ours. We want both parties to be happy and always ready to talk about what interests you. We are interested in you more and more effectively solving the problems of the company, so we spend less effort on it. We call this professional growth and raising the level of responsibility. And the worst symptom is when we have to reduce your level of responsibility.

Previously, we could entrust you with more responsible tasks. We asked you to deal with the problem, and you were figuring it out. And now you can’t handle it, so we need to level down and make decisions for you. We have to decide on methods you will apply to solve the problem, and on how long you will be solving it. This is a wake-up call, Alex”.

In order not to end up with dismissal, you need to verbalise the main point when hiring. Precisely, what the company expects from the employee and what the person wants from the company. The manager must indicate the conditions in which the company part with employees. For example, tell how the company estimates the growth of a specialist and what will happen if there is no growth in three years.

Typically, a good specialist always strives to expand their area of ​​responsibility. It doesn’t have to be career advancement. For example, it can be immersion in more complex technical problems. But in a healthy situation, a person wants development. In business, this means that they solve more and more complex and responsible tasks.

The development isn’t universal value. Not all people need it, but for companies that want to grow, this value is indeed universal.