JetStyle: Our opinion on the possibilities and limitations of Alice by Yandex

We spoke with our team lead Vitaly Semyachkin about the limitations and possibilities of Alice that developers are facing now and about the challenges faced by our team when we began to explore this topic. 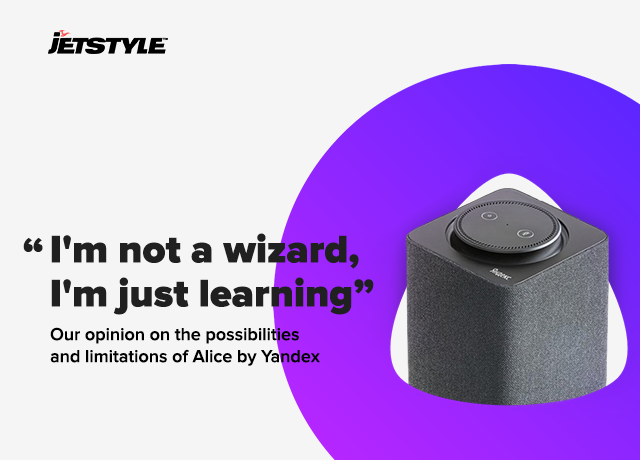 Here is what we found out. From a developer's perspective, Alice and Yandex.Station are a chatbot, which is able to communicate by voice rather than text. But even compared to the chatbots for Telegram, this is still a more limited story.

At the same time, there are undoubted advantages:

In fact, skills for Alice now are a conversational experience. We are building a dialogue. The user tells us something, this information reaches the developer in a textual form, the developer draws some conclusions in the course of processing of the information and can respond to the user only with a voice.

As the way to respond to the user, the developer has three tools: a voice, an image or a group of images, or a button link. But we don’t have access to the management of the speaker itself. We can’t change the volume, turn the speaker on or off by voice through the developed skill. We can’t even set the alarm. Yes, Alice itself has this opportunity, but the developers simply don’t have access to it. For example, we can’t make a skill like Alexa has: “Wake me up with something nice from Black Sabbath” or “Wake me up at 5 am with BBC 1 Radio”

You should also understand that Alice in Yandex.Browser, in the app and in Yandex.Station has exactly the same API for developers, the same voice interface, just different entry points.

So, what is available for developers now:

As for our experience, as soon as Yandex started accepting applications for certification of web studios and agencies to become partners of Yandex.Dialogues, we immediately got in.

And we started considering using voice assistants even earlier. For instance, based on Alexa from Amazon, we have set up a smart meeting room in our office. By a voice request, it can:

All of this can now be done on the basis of Alice too, no problem at all. And it will even answer in Russian. Awesome!

Apart from that, before Yandex started accepting applications for certification to become partners of Yandex.Dialogues, we did some brainstorming on the potentially useful skills for Alice. Now we are picking the ones that could be done without losing value with the capabilities of the current open API. For example, we can use Alice for people with disabilities, or when providing first aid and calling a medical chatbot using a voice assistant.

In any case, we can say with confidence that Alice from Yandex will be developing and improving.