Virtual reality and real estate sales: how it works

Recently, we’ve been talking a lot about the new technologies that should be put into use right now, even if businesses are not quite ready for them yet. We even wrote an article about it.

Today we are sharing our story about the use of VR in real estate sales. The experience that we’ve gained over the past couple of years. 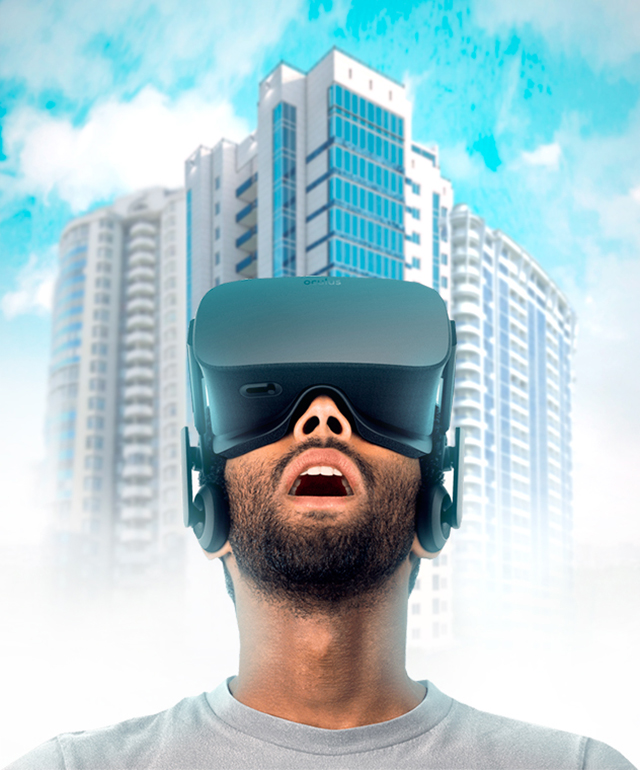 Why VR and why real estate developers?

Virtual reality slowly but surely becomes a part of our everyday life. Large IT companies have already bet on this technology, and by 2018 VR headsets will boom on the consumer market. Sony, HTC, Facebook and Microsoft are involved, it seems that only Apple has not yet announced that virtual and augmented reality will be their core development trend.

Businesses, that were once reluctantly and slowly getting used to the Internet and digital systems, today demonstrate the readiness to adapt quickly to new conditions. Digital agencies are expected to accumulate relevant knowledge and experience in advance in order to be able to offer pre-tested and proven technology solutions to the business.

Once we realised that VR is here to stay, we decided it was the time to master this tech and develop new services and products. The first thing that came to our mind was helping real estate developers sell the apartments they haven't built yet. It was obvious that VR has every chance to become the sales tool that communicates the value of something that doesn’t exist yet, creates a powerful emotional reinforcement when buying. 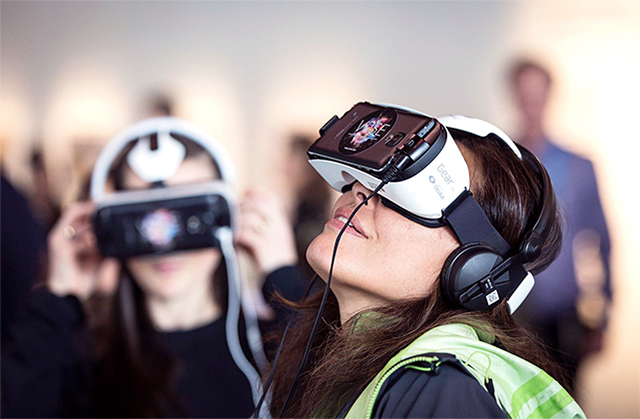 What did we do?

Back then (2 years ago), we didn’t have any decent VR devices, so we just used the most basic one we could get – Google Cardboard (a DIY kit made of a cardboard, two plastic lenses and a smartphone). We only spent a week or two, and that’s it— you could walk around the virtual apartment, go to the windows and enjoy the same view that the tenants of the future apartment would have.

Still, it was clear that there’s no way we could approach our potential clients with that cardboard thingy. So, we 3D printed the first (completely crap one), the second (not really comfortable to wear) and the third (quite alright) versions of our own VR headset. Of course, it wasn’t even close to Oculus Rift, but it was good enough to allow us to show our clients what we were capable of. 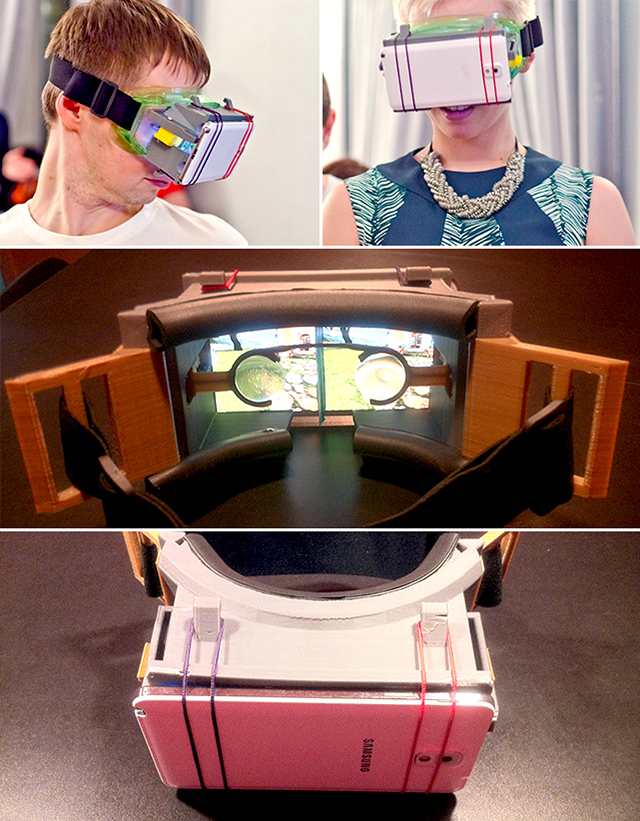 Here’s a typical scenario of our communication with clients

While negotiating over a website development or digital strategy with the client, we would also mention virtual reality. The conversation looked something like this:

– Oh, and you can use VR to walk around your not-yet-built apartments! Here, put this headset on and let’s try – we insisted.

– Really? Why would I wear some weird glasses? That’s just bollocks, – a client would say.

After such a dialogue, a financial director, usually, a man, would take the headset, put it on and start yelling something like: “Oh my goodness! Guys, come over here! This stuff is just awesome!». In the end, everyone is happy, everything is great.Yet, one lady, let’s say a marketing executive, feels nauseous, and she's not alone. And that’s not because we did something wrong. The problem is – 2 years ago just about every VR system had this issue. The image displayed by the headset was lagging behind the user's vestibular apparatus. The lag of only a few milliseconds created such unpleasant effect.

So, it turns out we made all this effort only to hear a "no": “Look, guys, this is really big, but we can't invest into this tech at the moment. Some folks are okay but the others feel dizzy! We can't use it at our sales department”.

Back then, we decided to hold on to the project. We knew this problem would be solved in a couple of years (i.e. by 2016) with the next generation VR headsets becoming available.

In addition, we have developed a solution that enabled you to look at the future interior not through the headset, but rather through the smartphone screen: just hold the phone on your outstretched hand and look through the screen at the virtual surroundings. This surely wasn't as exciting as the VR “walk”, but, at least, we managed to get rid of nausea.

So, we took a break, waiting for decent consumer headsets to hit the market, but then the crisis happened and the real estate market in our country went down. No one wanted to try new fancy marketing technologies, which is understandable.

However, during that time, we’ve learned how to deal with another issue: when you are using the VR headset you are having a sensory deprivation issue. You can only control what you see by moving your head. As of yet, there is no compact out-of-the-box solution that would allow moving around with your feet, not the joystick, which means that there is no complete immersion in virtual reality. 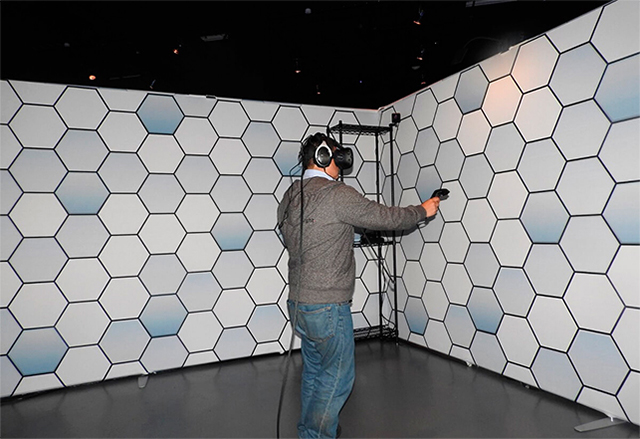 So we came up with this

We are talking about real estate developers, and they have a practice of selling through showrooms: one apartment is "built" not in the potential building, but in the sales office so that a customer can walk around it and look at the interiors.

Here's what we suggested: we "build" an empty room in the sales office and plant sensors in the corners of the room. After that, this room can be turned into any room in the building! Which means that you can put on the headset and say: "Let's see the room on the 16th floor, south side, interior No. 4”, - and you can see that room straight away. This way, the salesperson can demonstrate the customer any apartment that's not yet built, without leaving the office. That's the virtual showroom we built.

What else could be done? When customers walk into the VR apartment we’ve modelled, they basically enter a computer game. This means they can do almost anything. For example, they can touch a chair (and it will rock), grab some wine from the shelf or jump on the sofa. Or, we could arrange so that by touching the spot on the wall the wallpaper would change, and by touching the window the views outside would swap from summer to winter, for example.But for that, we would have to shoot the landscape both in winter and summer. 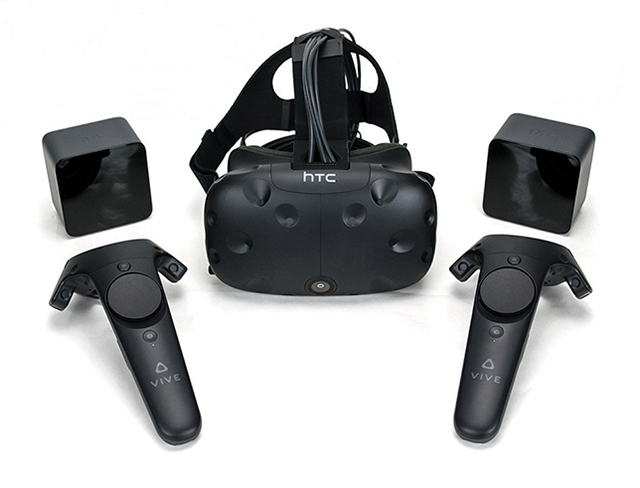 Today commercially available VR headsets still have the sensory deprivation issue but they are way better at dealing with it. Take HTC Vive as an example. If we are talking about movement in space, then this is the first consumer product that allows walking across a limited area. It understands where the user's head and arms are, and this is enough to move around the room. HTC Vive offers precise positioning but it's unbelievably expensive.

There's another solution, but it's prosumer rather than consumer, and it's based on optical tracking, but it's just insanely expensive. It's available abroad and some guys in Moscow who works for the government also have access to it. But we just can’t afford it at the moment. Of course, we put some effort into this and we made our own system based on acoustic sensors but there are limitations as well.  That’s all for now.

There is also a cheaper solution to implement — 360° panoramic video. It is suitable for the sale of the suburban real estate, for example.This technology is very popular in the West, and we can do that as well. We take a spherical camera (we built our first one from a 3D-printed rig and 5 GoPro cameras) and shoot the property from the inside and outside. Then you can walk around it in the VR headset. Still, there are limitations: the first one — there must be a real building, the second one — you can only walk the camera operator's path, meaning you can't walk anywhere you want.

Now let's get back to here and now

Everything we spoke about is based on the assumption that the developer purchased the devices in the office and equipped the sales area. We aren't relying on customers having their own devices, but we can try to predict what will happen to the market in the coming years.

By 2018, virtual reality will become a familiar phenomenon. There will be new buying scenarios, which can already be tested in the attractions that we talked about. The tech will supposedly be used in these two ways:

1. The client comes to a properly equipped showroom or we come to the client with our VR devices;

2. We target a larger audience and places with big footfall, like shopping malls.

Today developers place mockups of future houses and neighbourhoods in such places but it would be much more effective to equip a place where anyone can be in a virtual building, and display everything that a person sees inside the house to onto a large screen in the mall to attract everyone’s attention. Then, we could give away a DIY cardboard kit and download a mobile app on the phone to those who are interested in the property advertised and want to show it to their families at home. If the smartphone's performance is not enough to handle the app, then the users may have some issues with the vestibular apparatus while using the app at home. But this only means that it is necessary to supply the sales area with modern devices that don’t have such problem and to install a previous generation solution to a potential buyer (unless, of course, they happen to have a VR headset at home).

Does this mean that the real possibilities for the VR application will only appear by 2018?

Definitely not. Everything we were talking about can be done and should be done right now. Because now is the time for such projects, for trials and experiments, for gaining experience and understanding it. We need to demonstrate the expertise we have and to start doing the first cases for our first clients. It's not enough to make a sales tool, we need to be on the same page with the clients and learn how to get profit.

We have a tool that we integrate into the real sales processes in order to get feedback from the salespeople and analyse it. And this tool, as well as the business processes, will be changing. In this case, not only the industry's suppliers should learn how to work with new technologies. We already have 2 years of experience. And the sellers will soon teach the developers how to apply VR, and the latter will have to undergo training and embed the new technology into their sales chain.

If you remember how much time businesses have spent learning to use context ads and targeting, then you'll understand that they will need a few more years to make the transition. If you want to apply the new scenarios in 2018, then it's the right time to learn and try! Don’t delay any longer.