Our CEO Alexey Kulakov shares his thoughts on the technologies that will soon be causing a revolution, the things we'll have to learn all over again, and the things we'd better start mastering right now. 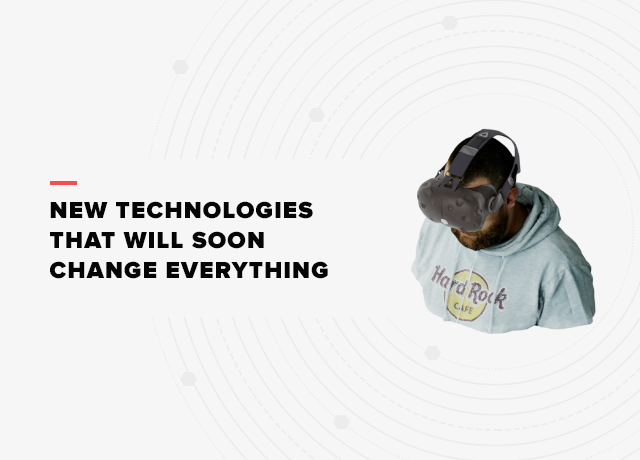 We all have experienced the revolution in the perception of information. Just remember what it was like. The Internet arrived, and it took us a long time to believe it. By ‘us’, I mean the society, business, experts of this newly emerging industry. It took about 10 years or so (although it’s safe to say it still hasn’t happened everywhere) for us to start realising that the Internet is not exactly "brochures, but on the screen" or  "a TV but with clickable links".

We discovered new features: total memory and accessibility. Interactivity. Remember how obsessed everyone was with that word? You could add ‘interactive’ to anything and make it look better. Interactive books. Interactive movies. Interactive ads. Literally anything – even interactive vacuum cleaners!

After a while, it turned out that these new features didn’t just change the culture, they also changed business and the structure of our society in general. There was a whole industry that serves these new features: search engines, social networks, websites, advertising technologies. Specialists who learned to understand all this, gradually turning IT magic into understandable business practices. Departments in companies that have learned to use the newly invented tools. Remember that? How much time did society need to master this new environment? Twenty years? Thirty? I am asking this question because we’re going to go through this all again.

Here are the technologies, the combination of which is going to change everything:

I’m sure you know what these words mean, so I’m not going to get into the details here. What important is that all these technology trends are at the pre-final stage of the Gartner hype cycle, which means they are just about to become widespread. They passed the research stage long time ago. It’s a little too late to invest big money in them, but ‘regular businesses’ still don’t know how to use them.

They don’t know how to use them because we humans don’t understand how our environment is going to change. We think, once again, that virtual reality is a bit like "the new Internet, but in 3D". We think of blockchain as "the new money, but you don’t necessarily need a bank for it". That machine learning is "like programming but looks more like magic". Even 360° video, for us, is like "a regular video, but you can move your head around". And wearable electronics are just another tracking device. And all this is just as close to what awaits us, as the notion that the Internet was going to be just  "a booklet, only with buttons".

The user experience is set to change dramatically, which means we are going to have to build everything from scratch:

•    Technologies for attracting the user;

•    Will have to learn again how to design interfaces;

•    What events to look at in statistics;

•    And somehow to work out what businesses and in what situations will need all these new digital bells and whistles; where they are just a sideshow; and where they cause nothing but trouble.

We currently have two reliable methods of saying something to the digital world: the mouse and the keyboard. Both of these tools are good enough. They are fast, accurate, and easy for the user to control. So much so that people learn to "think with their fingers" very quickly and no longer get distracted by the imperfect "pads" between a person and a computer.

The current options work so brilliantly well that a question arises: why do we need to create any other input tools? Why do things like leapmotion, kinect, and other interfaces appear, where all you have to do is move your hands? What new benefits can they add to the user experience?

Let's start with what isn't going to happen in the nearest future. All new input tools are going to be slower than keyboards, mice, or voice input for quite some time. Another 20 years or so, I'd say. Slower means that we will still be using keyboards or voice to send a text message to a computer.

By the way, whilst we’re on the subject of voice input, there are good chances that voice interfaces are going to overtake the typing. Voice recognition quality will improve drastically very soon and I will probably be able to dictate my next article rather than type it. Nothing will change greatly here, though: one will still need to focus and look at the screen to check what letters appear. And it will take a long time for people to get rid of the habit of typing in the same old way. Think of your grandmother, who probably still finds it easier to write by hand.

•    The habit of control over what we’re writing will disappear. Voice input generally doesn’t require us to look at the screen: hearing ourselves will be enough.

•    There will be a blurring of the boundaries between ‘mindful text input’ and ‘just blabbering on’: from being strictly preconditioned technologically, this will turn into an agreement between you and the machine. It always listens to you but will sometimes suppose that what you just said was some sort of hint and that it needs to react. At the moment, duct tapes (commands which are the direct equivalent of a voice button) are used to change the input mode. But it’s already clear that everything is moving towards the machine guessing.

•    Your environment will prompt you to record everything you say.

•    Combining the technology with wearable electronics will eliminate the need to speak out loud. This will take a little longer (about 5−7 years), but it will eventually be enough to "speak silently", and the text will be taken on the basis of the vocal cords, not the acoustic vibrations.

The voice input example demonstrates that the most interesting things begin when several technologies overlap: voice input plus machine learning give us an opportunity to guess what a person wants to say. Progress in data storage, meanwhile, means that deciding whether or not to record oneself will no longer be an issue.

A lot of marketing segments, new forms of entertainment, and new social trends arise at the point where these technologies intersect. It is not yet clear what exactly is going to emerge in this niche, but let me try to give you a few examples:

•    A huge niche for voice intermediaries (as in Cyrano de Bergerac, when one person speaks on behalf of someone else). This all will start with translators from one language into another. I mean, it has already started. But things get more interesting when the translation is from "one kind of Russian into another". For example, you could have an oral speech "corrector", eliminating swearing and interjections.

•    A separate (and pernicious) niche is related to censorship and the security in general. I am sure you can work it out yourself here.

The list goes on, but this is enough to illustrate the situation. The voice input is not just a keyboard substitute; it’s a radical change in the way we interact with our environment. The boundary between "the user intentionally gave the command" and "the machine thinks what the user wants" will be blurred. This will change the interface environment and our approach to marketing completely.

Something that marketers have always dreamed of, and what the authors of anti-utopian novels were horrified about (and what is easier to think of in terms of spells and magic) is going to happen, namely: society will invade directly into our thinking. And this won't even require neural interfaces.

Now we can get back to some even newer input methods: gesture- and neural interfaces. Again, these aren’t "a new mouse" at all. Numerous articles could be written about the segments that are appearing around them, but it is important to understand that this is a totally new experience, a different business environment, and different interfaces.

One of the most important consequences for me will be the final birth of UX design. Today, no matter how often industry experts say that user-experience designers are about the experience and not the pictures, business and society still don’t believe them. But the newly emerging environment will set us the task of directing the experience that feels real and immediate − without the obligatory use of such common "crutch" as the screen forms.

I deliberately chose the example of voice input to show that the most common method of interaction, voice, is going to change drastically, even without any revolutions in how we’re going to achieve the result that the digital environment has prepared for us. As for how the evolution of screens into virtual and augmented reality will change us, that is a separate matter – and a significant one. But my main argument is relevant to that topic, too.

We will all try to interact with it in the same old way, and we will trip up.

Interesting times lie ahead of us once again. Everything is about to change and windows for new opportunities are opening. The technologies are already here and it’s about time to start thinking how society and business are going to use them.

Right now it's time to experiment, and the first experiments will be clumsy marketing stunts that the media will write about, and that consumers will see as magic. Why did I say "will"? We’ve already started to do so, and that’s exactly how it is. Our clients are saying exactly that about our first experiments: that they are "magical". A magical poster. A magical app. But this is all just fooling around for now, although it’s very important. Mankind is learning to play with the new toys and gaining experience. The sooner you give these toys to the business world, the higher the chances that it is your business that will notice, stake out and name the niche.